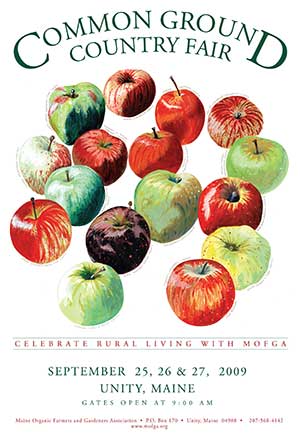 “The Apples of Maine” Poster is a Winner

Months before the Common Ground Country Fair, John Bunker’s winning design for the 2009 Fair poster (and other products) is garnering delicious praise throughout Maine. Maybe that’s because the 16 apples depicted, one from each Maine county, are “a metaphor for local communities, food, family and agriculture, where a lot of potential for the future is,” says Bunker. We can use the rich heritage of Maine’s heirloom apples to “imagine the best of the past and use what we imagine as a way of moving forward.”

Bunker has long been fascinated with multiple varieties of any crop – tomatoes, peppers, apples – that originated in a particular area, because of the deep connection to place, to agriculture. “That’s the ultimate in local,” he says; “saving a seed, growing it into something, naming it, creating an heirloom, passing it down.”

That process makes heirloom varieties fascinating and frustrating. “A lot of local varieties are not in any book,” says Bunker. The hidden history of these apples can be “maddening when you’re trying to find information, but it adds to the localness of them.” He recalls starting with the deep purple-skinned ‘Black Oxford’ apple of Oxford County, “then it became like a game” to find other Maine apples – “like the license plate game.”

Bunker has brought much of that history to life by rescuing Maine’s heirloom apples and offering them through Fedco Trees (www.fedcoseeds.com/trees), which he coordinates; and by planting a Maine Heritage Orchard at MOFGA’s Common Ground Education Center in Unity.

“Somebody, probably Russ [Libby], said, ‘Let’s do a couple of orchards here.’

“What an opportunity!” It fed right into Bunker’s belief in the value of rescuing Maine’s heirlooms. “I had made the decision not to go to Kazakhstan, Russia, China [centers of origin of many apple varieties], because I was driving by all these apples in neighbors’ yards.” Going abroad “would have been the ultimate in hilarity. I thought I should be learning about the apples that grow here.”

About two years ago, Bunker decided to do a poster of an apple from each county. He’d been doodling all his life and had learned to draw better to illustrate the Fedco Trees catalog.

“I did one apple for a friend for a birthday present, and it came out good.”

When he wrote his book, Not Far From the Tree: A Brief History of the Apples and the Orchards of Palermo, Maine 1804-2004, “people said, ‘You really need to do a cover.’

“So I picked the four quintessential apples that I kept finding in Palermo and painted them.” The result “gave me the courage to do the poster.”

He worked with paint board and acrylics, basing the work on photos he had taken.

Limiting the design to one apple per county was a challenge. “I could have done a whole poster on Kennebec County. That was the breadbasket of Maine; all those great farming towns along the river.”

Bunker liked the 16-county idea, though, “because it says something about caring enough to know what the counties are in Maine. It says local agriculture was everywhere. People can look at an apple on the poster and say, ‘I know that place!’”

Bunker was at the MOFGA board meeting where the winning design was selected, “but I left before the poster meeting. I was walking out, and Roy Miller [who co-coordinates the Country Store at the Common Ground Country Fair] came running up to me saying, ‘You won’t believe this poster! You’re going to love it!’”

Bunker praises Liberty Graphics for doing a great job with the color separation. “I’m gratified. It matters to me that people like it. And I’m proud for Maine. We did this. It’s our heritage.”

His advice to other aspiring poster contest entrants is, “Do it. People should screw up their courage and paint something. I didn’t go about it thinking, ‘What would make a good Fair poster?’ but ‘What do I want to say visually to the world?’ It’s a good way for people to express themselves.”

As announced in the last MOF&G, bottled water will not be sold at the 2009 Common Ground Country Fair. An abundant supply of fresh, clean drinking water is available free, so bring your own bottle, jar or cup and look for one of the many drinking water filling stations or water fountains. And, of course, the Fair vendors always have an enticing array of refreshments, including bog juice (made with Maine cranberries), apple cider, smoothies, honey sweetened lemonade, peach lassis and more.


Coffee at the Fair

For most of the history of the Common Ground Country Fair, coffee sales were prohibited for a variety of reasons, including the fact that in 1977 no reliable sources of organically grown and processed coffee existed. Another strong consideration was the Fair’s focus on Maine foods.

MOFGA’s commitment to sustainable, organic farming is rooted in Maine but is not limited to our geographical boundaries. That spirit inspires MOFGA’s El Salvador Sistering Committee, informs our policy work on food safety and other important agricultural and environmental issues, and guides our deliberations when considering what foods to serve at all MOFGA events, including the Common Ground Country Fair.

For the 2009 Fair, MOFGA is considering proposals to offer coffee from a variety of food vendors and organic coffee processors. We expect to invite one or more of these to sell coffee at this year’s Fair. Among our considerations are that the coffee be grown and harvested according to organic practices, that it is processed in Maine, and that, accompanied by educational offerings, this occasion reflects MOFGA’s mission to “illuminate for consumers the connection between healthful food and environmentally sound farming practices.”