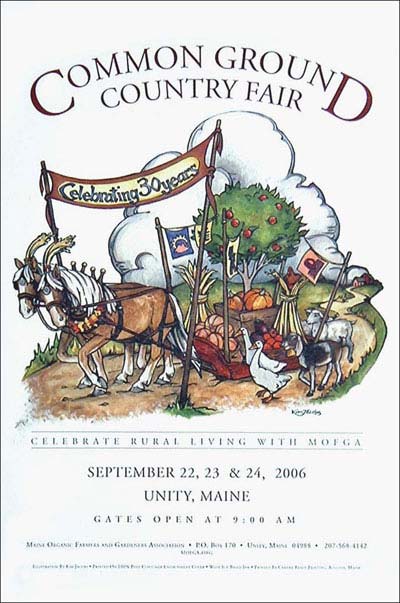 When Kim Jacobs studied comparative religions in college, her undergraduate thesis discussed pilgrimages of various faiths. Subsequently, the idea that “we’re all in a pilgrimage in our own lives, on our own journeys… often comes out in my paintings.” Not surprisingly then, her winning design for the 2006 Common Ground Country Fair depicts a joyful parade of animals journeying through the Fair.

Jacobs did a similar painting for one of her widely sought-after calendars (called The Cobblestone Way) many years ago and had been thinking of applying the idea to a Fair design for a long time. Her winning design “seemed kind of appropriate for my feeling about the Fair – combining different aspects of the Fair…animals, growing, flags that symbolize areas of the Fair.” The parade theme conveys the feeling that the Fair “is moving forward, and that it’s a celebration, a procession.

“From the start my art has had a pathway that moves through it,” Jacobs continues. She uses doors, windows and archways (such as the banner in the Fair design) to convey the idea of movement along a path. “There’s a way in and a way out,” she explains.

Jacobs took art classes in high school and college, but to a large extent is self-taught. She usually works in watercolors, but the Fair design was done in acrylic (and ink) for stronger colors. Her calendars, note cards and Christmas cards have sold very well all around the world, in major bookstores and gift shops, and at some independent bookstores. She is now published by Ronnie Sellers Productions in Portland; and she sells her products on eBay and through her Web site, kimjacobsart.com.

Originally from California, Jacobs’ move to Maine was a pilgrimage of sorts. She met her husband, Bob Klein, when they were both living in Santa Cruz. They were seeking a simple, rural life, and Klein had read about and appreciated the Nearings’ lifestyle. Prices on the West Coast were too high, though, so Klein came to Maine to look for land, synchronistically during the Common Ground Country Fair. At the Fair, he was listening to a talk by Eliot Coleman when a voice from the back of the crowd asked, “Eliot, would you speak up please?” Coleman responded, “Sure, Helen.” Klein turned around, saw Helen Nearing, and, after the talk, introduced himself. “His heart flipped over,” says Jacobs. Nearing invited Klein to her Harborside home, and they developed a friendship. She was especially interested in Jacobs’ Dutch heritage, which she shared, and in Jacobs’ artwork, which Nearing sent to her relatives in Holland.

Klein and Jacobs moved to Maine in 1994, and he apprenticed with Greg Moore and Kathleen Starrs, meeting the wonderful community of people in Tenants Harbor in the process. In 1997, with help from MOFGA’s executive director Russell Libby, they found affordable land in Brooks, and Klein developed his market garden, selling produce to restaurants and farmers’ markets. Jacobs continued with her art.

They live a quiet, simple lifestyle in their cottage off the grid in the middle of Zephyr Hill Farm’s 130 acres. Solar power provides their electricity, and they grow a lot of their own food and cut firewood from their own woodlot. “It’s a pretty nice lifestyle,” admits Jacobs, and it’s “a bonus living near MOFGA.”