Ending the War on Artisan Cheese 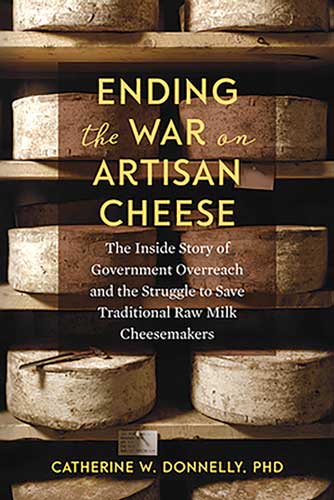 “It’s terrifying to think that, with the stroke of a pen, the FDA could wipe out centuries of traditional [cheesemaking] practice. It’s even more frightening to think that this could be accomplished through the incorrect interpretation of scientific study.” – from page 81 of “Ending the War on Artisan Cheese.”

Dr. Donnelly makes many statements like this – thoroughly documented by facts and scientific analysis – in her new and important book. This is why she decided to label what she has written about as a “war” on traditional raw milk cheesemakers. A professor of nutrition and food science at the University of Vermont, Donnelly has illustrated in meticulous detail how dairy food safety regulation can be corrupted.

This book can be dense with citations and lengthy background describing specific cheesemaking techniques or the history behind regulatory practices, which could be difficult for the non-cheesemaker to wade through. At the same time Donnelly takes great pains to ensure that this book is not a polemic against government regulation across the board; she believes that effective and scientifically based regulation greatly benefits our commercial food systems and consumers. In fact she shares many examples of federal and state food safety regulators who support and defend artisan food producers using science at the core of their food safety oversight.

Early in this process (which began with the creation and implementation of the Food Safety Modernization Act, or FSMA) one might have argued that the U.S. Food and Drug Administration (FDA) was mistakenly regulating food the same way it regulates drugs. However, Donnelly’s book illustrates how a small group of dairy regulators at the FDA has willfully ignored the scientific findings of academics and other capable food safety professionals in an effort to promote pasteurized milk cheeses alone.

The FDA’s efforts include an attempt to “prove” that raw milk cheeses are impossible to be made safely. This unwarranted slander of traditional practices continues despite the absence of any proof of its hypothesis found in its recent extensive targeted sampling and testing, despite centuries of safe consumption of cheeses made with traditional cheese processing techniques (including raw milk and wooden implements) and despite new science affirming the food safety benefits of these traditional techniques when applied properly.

It’s tempting to look at this issue as another painful example of science being shunned in favor of “alternative facts.” In a testament to Donnelly’s unbiased inquiry, she endorses the findings of a 2018 Trump administration report that recommends the FDA hand over its oversight of dairy food safety to the USDA, in part because USDA scientists and inspectors are already working on food safety for meat, vegetables and fruits. Imagine a world where science is taken seriously by regulators and producers alike? Donnelly has done that, and she can prove that that world includes safe cheese that tastes amazing.