Where Have All the Bees Gone? Pollinators in Crisis 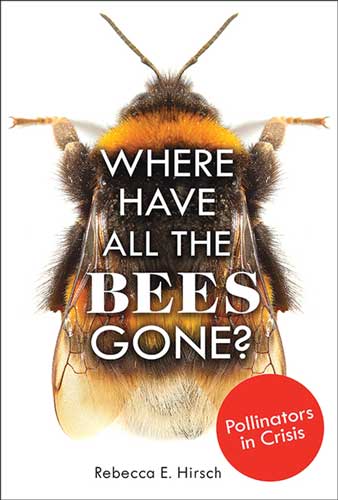 Bees are disappearing, and not just honey bees. Bumblebee populations are in decline, too. For those of us who like to eat, this is a problem because bees pollinate 75 percent of the fruits, vegetables and nuts grown in the United States – about $3 billion worth of crops each year. Plus, they pollinate plants and fruit trees that provide food for birds and other wildlife.

Written for teens and packed with photos, this is a book any gardener passionate about pollinators will want to read. Rebecca Hirsch opens by taking us into the field with entomologist Robbin Thorp. He began monitoring the population of Franklin’s bumblebee in Oregon and California in 1998. The first year he tallied 94 bees. The following year, 20. Then nine, and in 2001 he saw just one. He wasn’t the only one. Scientists in upstate New York and southern Ontario noticed similar declines in eastern bumblebee populations.

There are more species of bees than all the reptiles, amphibians, birds and mammals on Earth combined, writes Hirsch. And although they aren’t the only pollinators – birds, bats, beetles and butterflies pollinate plants, too – bees are the most efficient.

That pollinating efficiency is important to Maine gardeners and blueberry growers, because the flowers of blueberries, tomatoes, peppers and eggplants hold pollen tightly inside their anthers. Only bumblebees and a few other native bees – including the Maine blueberry bee (Osmia atriventris) and the Southeastern blueberry bee (Hapropoda laboriosa) – can shake the pollen loose using a high-pitched buzz. Without them … Hirsch highlights what can happen when wild bees disappear. Decades of pesticide use in apple orchards in Sichuan, China, killed off the natural pollinators. Now farmers have to pay workers to climb ladders and hand-pollinate the blossoms using paintbrushes of bamboo and chicken feathers.

With reports of bumblebee decline, scientists began looking for causes. Pesticides did not appear to be the issue because not all bumblebee species were declining and the problem wasn’t isolated to a specific area. Because the killer seemed to be hitting close relatives of Franklin’s bumblebee, researchers wondered whether increased use of commercial bumblebees in greenhouse production might be the problem. Hirsch devotes a chapter to that research, and another to problems that neonicotinoids present to wild bees. Even at low doses, neonics are harmful because they are long-lived and mobile. Bumblebees exposed to neonics in farm settings produced fewer queens, and another type of wild bee laid fewer eggs.

Hirsch includes a chapter on bee evolution and one on bee diversity, highlighting a year in the life of a bumblebee. She concludes with two chapters devoted to bee conservation and positive actions people – and kids – can take: Plant gardens for pollinators, engage in citizen science bee counts and encourage organic farming and gardening. Back matter includes a list of online resources and links to citizen science projects.