Immigration, Race, and the Struggle for Sustainability 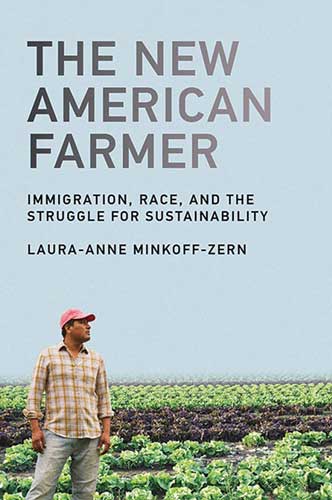 Laura-Anne Minkoff-Zern recounts the stories of new Latino/a farmers who have miraculously managed, despite many obstacles, to move from farmworkers to farm owners in the United States. Of the dozens of farmers she interviewed, almost all use organic practices, but only two are certified organic.

Now an assistant professor of food studies at Syracuse University, Minkoff-Zern started researching this book as a graduate student in 2011 and traveled to five U.S. regions where ag agency staffers, farmers’ market managers and researchers helped her locate the farmers, many of whom speak little English and lack legal status. As a result, she is certain that the U.S. Agricultural Census underestimates the numbers of Latino/a farmers since many rent land, avoid government offices and have not been included in programs for farmers. She reports on a few programs that train Latino/a farmworkers to become farm managers or owners: the Small Farms Program at Washington State University, Crossroads Community Food Network in Maryland, Viva Farms in the D.C. area, the Latino Economic Development Center in Minnesota and the Agriculture and Land-Based Training Association (ALBA) in California. Over 20-plus years, ALBA courses and its incubator have helped launch dozens of Latino/a-owned farms.

With just a few interesting exceptions, the farmers Minkoff-Zern located farm from 10 to 40 acres, using “alternative farming techniques” learned from family traditions. They grow diverse crops including many that are essential to Mexican cuisine. Feeding their own families healthy food is a major goal, and food sovereignty is a crucial value for them. Instead of synthetic chemicals, they use integrated pest management, employ mostly family labor and sell direct, often through farmers’ markets.

The Mexican émigré farmers highlighted in this book have struggled to reach the status of independent farmer, but the hardships of running a farm pale against the benefit of regaining control of their own work and lives. Minkoff-Zern summarizes the obstacles: “Besides the typical challenges of becoming a new farmer, which include lack of access to start-up capital, land, labor and markets, immigrant farmers must contend with their citizenship status, race and ethnicity, as well as linguistic, literary and educational limitations.” To their advantage, coming from farming backgrounds in Mexico, these farmers already know how to farm, how to work hard and how to live off the fruit of their own labor. That they still want to farm after years of doing underpaid and often exploited farmwork reveals how strongly they cherish their agrarian traditions. Stacked against them are layers of prejudice, narrow-minded rural networks and a lack of social and economic programs designed to help them. Minkoff-Zern reports on USDA programs that fail to reach Latinos/as both for lack of resources for alternative farming methods and for lack of personnel who even know these farmers exist and who care to take the trouble to communicate with them. Add to this the overall economic context: Even well-established multigenerational white farmers are losing their farms because of cheap U.S. food policies. Yet for those who succeed, the farm of their own, even on rented land, represents a welcome recreation of “home.”

The exceptions to biodiverse small-scale enterprises are a few large orchards in Washington state where farmworkers worked their way up on white-owned farms that lacked heirs who wanted to take over. Rather than let their farms be swallowed up by larger neighbors or sold for development, the white farmers sold on favorable terms to trusted field managers. Often the white farmers continue to live in the farmhouse while the new owner commutes to the farm. Minkoff-Zern tells of Jesus Limon, who grows hundreds of acres of tree fruit, some certified organic. Unlike most of the white orchardists, Jesus, although over 60, works in the fields with his many employees. His son Jose, a Farm Service Agency employee, showed Minkoff-Zern several other orchards owned by former farmworkers. They said they rely a lot on family labor but still sell through conventional packing houses and would like to gain more acreage. The other significant monocrop is strawberries: 65% of California’s strawberry farmers are of Mexican descent and 25% started as field workers and worked their way up.

Minkoff-Zern heard repeatedly from Latino/a farmers that farming is not just a commercial, moneymaking venture but a way of life. They choose to farm, rather than entering some other business, because farming is what they know, what they love to do and the heritage they want to pass on to their children. The conventional industrial model pursued by so many U.S. farmers does not attract them – and they cannot afford large acreage or equipment, nor could they easily access wholesale markets or production contracts. The standard technical advice on synthetic fertilizers and chemicals is of no more use to them than to many Anglo organic farmers.

As Minkoff-Zern points out, our movement for a more sustainable agriculture has everything to gain by including these new American farmers. Welcoming a few Latino/a farmers to farmers’ markets where we might sell should be an added attraction. Having bilingual staff with Mexican community roots would make them feel more welcome. We can start by translating our outreach materials into Spanish and providing Spanish interpreters at our conferences. Farmers who sell direct are much less likely to seek certification than those who sell to markets that require the label, but they might still be interested in the standards. Some National Organic Program documents are in Spanish, although you have to hunt for them. These are our brothers and sisters, and our movement for family-scale farms is international. We can learn much from people who have overcome so many odds in order to farm in this country.