With the exception of protected growing for season extension, most growers’ seeding thoughts have moved beyond late-season edible crops, and toward squeezing in autumn/winter cover crops before it’s so late they don’t produce much biomass. (I say this now, and who knows, it may be a long, warm autumn … )
In the realm of “take notice, but do not panic” news, late blight has been reported in Maine. The good news is that the late blight report was on potatoes in far northern Maine, and was associated with an infected seed source — not wind-borne spore dispersal. This is good for two reasons: firstly, there is low chance of other potatoes or tomatoes having been infected at the same time due to unfavorable conditions for disease development, and secondly, now that those plants have been destroyed and the outbreak contained, there is very little risk of late blight spread to the rest of the state. The only other recent report of late blight that I’m aware of is an as-of-yet-unconfirmed sighting in Ontario. I will of course sent out a late blight alert if the disease is confirmed closer to us. For now, late blight is not a threat to our region, though growers in far northern Maine may want to consider preventive controls (remove lower tomato leaves to improve airflow, apply copper and/or bio-fungicides before rain events).
Cucurbit downy mildew has continued making its way to Maine, with recent reports of the disease on melons in Massachusetts and on cucumbers in Massachusetts and New Hampshire. Those crops are likely at risk of infection from storms coming to us from the south and west, though specific forecasting is available here.
In July, prolonged wet conditions and high disease pressure seems to have overcome basil downy mildew resistance in some varieties, for some farmers. This is a good reminder that while downy mildew resistant basil varieties can often fend off the disease for a while, they are not completely immune.
Long-term forecasting from the National Weather Service suggests the next few weeks will be hotter and drier than normal. The greater probability for below average precipitation is good news in terms of reducing conditions favorable to disease (and a reminder to consider irrigating again if you’ve stopped watering recently due to adequate rainfall). The reduced chance of precipitation is bad news for inland Maine where drought conditions persist, and the Maine Drought Task Force reminds us that private well owners can report dry well issues here.

European corn borer in peppers (among others)

Despite the name, European corn borer (Ostrinia nubilalis) can be found in over 200 different crop and weed plants, not just corn. Some of the crops that they can be found in include peppers, beans, potatoes, hemp, mums and sometimes even tomatoes. A few other caterpillar pests of sweet corn will also get into some of these same crops — for example, this fall armyworm I found in sweet peppers in 2018 — and another common caterpillar pest, “corn earworm” (Helicoverpa zea), has also earned itself the names “tomato fruitworm” and “cotton bollworm.” 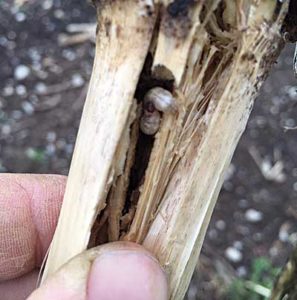 We’ll focus on peppers here, though the information is transferable to other crops as well.
European corn borer overwinter as larvae in crop debris, emerging as adults in the spring. Those adults fly, mate and typically lay egg masses in early corn at 450 growing degree days (typically June in Maine). The following first generation of the year can themselves begin flying as adults around 1400 growing degree days, and laying eggs around 1450 growing degree days (Southern Maine exceeded this growing degree day point near the end of July, so first-generation European corn borer damage would be expected to be visible now). This second egg laying generation of the season is typically the one that can cause trouble in peppers and other crops.
Damage in peppers can be difficult to notice at first as the caterpillar only makes a small entry hole near the stem. The most obvious sign of an entry point is the small pile of frass that is left behind. Apart from potentially picking peppers with caterpillars inside them, the real damage occurs when soft rot bacteria and water make their way into the pepper through the hole that the caterpillar bored into the top.
European corn borer is a minor, or even non-existent, pest of peppers for many, but where populations build up (often where farms are more densely located) and produce two generations, it can cause significant losses. If it has been an issue for you previously, consider pheromone traps to monitor for egg-laying flights of the adults.
An important cultural control is to remove or plow under crop debris that contains overwintering larvae. Insects that prey on European corn borer eggs and/or larvae include Trichogramma wasp species and twelve spotted lady beetles. If monitoring of adult moths shows sufficient pressure, effective spray options include Bt and spinosad products.
Source materials and more information can be found here, and monitoring and bio-control information is discussed further here.

At this time of year, most of you are too busy reaping what you intentionally sowed to take control of your maturing weeds. They know this. And they are busy dropping lots of new seeds. For next year. And the year after …
The title above comes from Dr. Robert Norris, retired UC-Davis weed scientist. Early in his career, he studied seed output of individual weed plants. The table below shows some examples. Black Nightshade is appearing on more and more farms. Before you know it, those green berries have mature seeds. Also seeing lots of Oakleaf Goosefoot, which is a sort of micro-Lamb’s Quarters. Foxtail grasses are in their full, seed-dropping glory right now. Seeds of most annual weedy grasses die after two or three years, but some broadleaf seeds can last for decades. Norris claims that, on average, the bulk of your weed seed bank will be depleted after FIVE years of obsessive weed control. And then, of course, you must obsessively maintain that discipline. 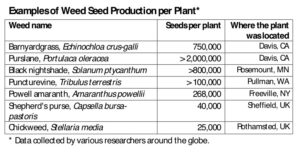 If you are looking at serious annual weed problems, year after year, it may make sense to take a patch out of production and grow a heavy duty, weed-smothering cover crop. This is something you would plant in early to mid June, depending on soil temperature. Waiting until the soil is fully warmed is important for two reasons:
1) you will allow a major flush of summer annual seeds to germinate, which you can then erase with a shallow tillage implement like a Perfecta;
2) Your cover crop seed will germinate very fast, outgrowing the weeds.
Good options are buckwheat, Japanese millet, Sorghum X Sudangrass, and forage varieties of cowpea and soybean. Cover crop seed isn’t free, but neither is the time and space you decide to set aside to grow a good cover.
Don’t skimp on seed, particularly if you are only setting aside a 1/2 acre-solid cover is the goal. The worst that excessively high seeding rate can do is waste a little money for no added benefit, except the peace of mind that you won’t have bare patches that fill in with weeds- and that’s actually a big benefit. So go for the high end of the recommended rate. 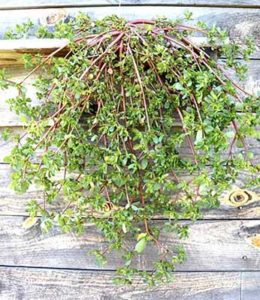 Remember, also, that cover crops are plants that require nutrients, just like the crops that we harvest.
While cover crops are often used to “mop up” excess nutrients to make them available to the next crop, the object of a smothering summer cover crop is to produce a cover that is impenetrable to sunlight so that annual weeds can’t grow up enough to produce seed. So fertilize – just 40 to 50 lbs of N/acre for grasses. If growing legumes, INOCULATE! 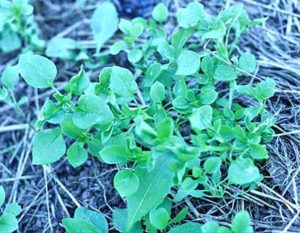 Sometimes, it makes sense to intensify your vegetable production on a smaller space while improving some other patches of ground.

Winter squash look ready to harvest before they actually are mature. It is important to wait for maturity to have maximum storage and best eating quality. Most squash varieties reach full size by 20 days after fruit set. Accumulation of starch and other dry matter peaks at about 30-35 days after fruit set. But, the fruit is not fully mature until the seeds are fully developed, which occurs about 55 days for butternut. This is different for other varieties. If you would like to read more, take a look at this article by Brent Loy, the well known, and sadly, recently deceased plant breeder at the University of New Hampshire. Or, here is a summary put together by the folks at Johnny’s Selected Seeds.

A critical factor in eating quality is maturity of the squash when it is harvested. Most small varieties reach full size by 20 days after fruit set. Accumulation of dry matter and starch content peaks at 30 to 35 days after pollination. However, the fruit is not mature until the seeds are fully developed, which occurs about 55 days after fruit set.

Dr. Loy stresses the importance of maintaining healthy plants until at least 50 days after fruit set because photosynthesis is essential to the development of sugars and dry matter. A squash that is picked too early will continue to develop seeds, but it does so by depleting dry matter of the fruit, thereby reducing eating quality.

Although fruit and seed maturity are similar across the three main species of edible winter squashes and pumpkins, harvest and storage recommendations vary by type.

Kabocha, hubbard, and buttercup (C. maxima) varieties should be harvested before complete seed maturation, at about 40 to 45 days after fruit set, when the fruit is still bright. That’s when the rind is hardest, so less likely to be damaged in storage. They also are susceptible to sunburn as the vines die down, so it’s best to get them harvested and out of direct sun before then to prevent the rind from turning brown or, with extreme sunburn, white. Kabocha squash have a high dry matter content and small seed cavity, so seed maturation off the vine is not a problem. However, once harvested, they should be stored at room temperature for 10 to 20 days to allow sugars to reach acceptable levels.

Acorn squash (C. pepo) are misleading because they reach full size and develop a dark green-to-black mature color about two weeks after fruit set – 40 to 50 days before they should be harvested. Dr. Loy says that a better way to judge maturity is to look at the rind where it touches the ground. Immature squash have a light green or light yellow ground color, whereas mature squash have a dark orange ground color. Immature acorn squash have low sugar levels and although they will develop sweetness after harvest, they do so by depleting the dry starchy matter to convert it to sugars. This means storage life is shortened and eating quality declines.

Butternut squash (C. moschata) are easier to judge by sight because they don’t acquire their characteristic tan color until late in development, 35 days or more after fruit set. If the weather stays frost-free, they should be allowed to remain on the plants until 55 days after fruit set. In short-season areas, they often are harvested soon after turning tan because of the risk of frost damage. At that point, however, the sugars have not elevated to the 11% required for good flavor, so butternut squash harvested at 55 days after fruit set should be stored for 60 days at 56-60°F/10-16°C, with relative humidity between 50 and 70%. Carotenoid content also increases in storage, making the butternut squash more nutritious after it’s been stored for a couple of months. To accelerate maturity and increase sweetness, Dr. Loy found that butternuts held at warm temperatures (up to 85°F/29°C) for two weeks develop acceptable levels of sugars.