Arika von Edler has captured much of what MOFGA represents with her painting of a cheerful goat chewing on a cover crop of red clover and winter wheat, with a native pollinator in the background.

“The dead zone in the Gulf of Mexico shows the importance of using green manures,” says von Edler. Cover crops and green manures help keep nitrogen and phosphorus – largely responsible for the dead zone – on farms (in plants and soils) rather than leaching or running off into Midwestern rivers and from there to the Gulf of Mexico, where they lead to the low-oxygen conditions that kill ocean life. Von Edler says she wanted green manures in her painting “because Maine farmers do so much with them.”

About the eastern tiger swallowtail in her work, she says, “One of great things about Maine is its appreciation of local pollinators. Not just bees, but so many local pollinators are equally appreciated in Maine. They are crucial to farming.” She originally had four pollinators in her painting but settled on one to simplify the art for reproduction on Fair goods.

Originally from Rhode Island, von Edler moved to Maine in 2006 to study at College of the Atlantic, where she focused on fine arts, organic agriculture and botany. She graduated in 2012 and worked on farms throughout her time in Maine, including at COA’s Beech Hill Farm. 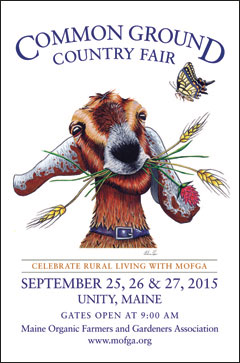 While working at Living Roots Farm in Washington County, she traded organic vegetables for neighbor Chris Alexander’s cheeses – and she got to know the “fun and mischievous” goats that sometimes got into the garden at Alexander’s Udder View Farm. “I tried to capture that in the work,” says von Edler.

She also worked for Will Bonsall in Industry, Maine, where she learned about seed saving and about the importance of green manures. According to von Edler, “Will Bonsall is probably the world’s most interesting man, and everyone should go listen to his talks at the Fair if they get the chance.”

For almost all the farms where she worked, von Edler made farm signs, labels for farmers’ markets and label designs – quite a switch for an oil painter. “The farmers appreciated my crude understanding of design,” she says.

Art runs in von Edler’s family. Both parents and her brother are artists, and von Edler herself is now working on a master’s in fine arts at the San Francisco Art Institute. Her focus is oil painting and portraiture.

“That’s what I loved about painting the goats,” she says. “It’s pretty much a portrait painting.”

Other than the goats, she almost exclusively paints people, as she finds them fascinating. Her work, some of which is posted at arika.me, is done in bold brushstrokes and vividly portrays personalities. Her poignant series of Tibetan refugees captures the overwhelming sadness of this diaspora as well as the strength and joy of these people.

While von Edler usually uses oil paints, she used less-glossy acrylic for her Common Ground work, knowing it would be scanned for T-shirts, posters and other products. She painted on canvas paper, which has a texture between canvas and paper, is durable and should scan better than canvas. She worked on the painting in Nicole DeBarber’s studio at the Beehive Design Collective in Machias, appreciating “all those beehive art tools at my disposal.”

Von Edler will be at the Common Ground Country Fair to sign posters, and she looks forward to returning to Maine after she graduates in 2017, especially given the expense of living in California, and the drought. Meanwhile, she remains connected with farming by visiting a friend’s organic vineyard in the Napa Valley to help with pruning, harvesting and grafting.

The Common Ground Country Fair is managed by two fulltime MOFGA staff plus, closer to the Fair, by an assistant and a logistics person. However, volunteers are key to the fruition, spirit and operation of the Fair. The steering committee, coordinators and many others are volunteers – more than 2,000 in all. All that hard work makes people hungry, and since 1981 the Common Kitchen has fed them. In 2014 the kitchen cooked 6,423 breakfasts, lunches, dinners and snacks from setup through cleanup. Also, so that people who can’t make it to the kitchen at mealtimes still get to eat, the kitchen is now open for full meals 24 hours a day serving regular, vegetarian and vegan meals.

This enormous amount of food – about $60,000 worth last year – is donated by organic farmers and by organic local and national businesses at the request of kitchen volunteers who contact donors throughout the year. We ask farmers to give what they are willing and can afford to give or food that’s hard to sell, such as small veggies, odd cuts of meat, etc. We emphasize to all donors that donations be organically grown or produced. Food not consumed during the Fair is kept for other MOFGA events or donated to local food pantries and soup kitchens.

Without the extreme generosity of our donors, Common Ground would be hard-pressed to feed its volunteers such quality meals. We thank our donors (and our dynamite chefs) from the bottom of our hearts.