The First 50 Years of MOFGA 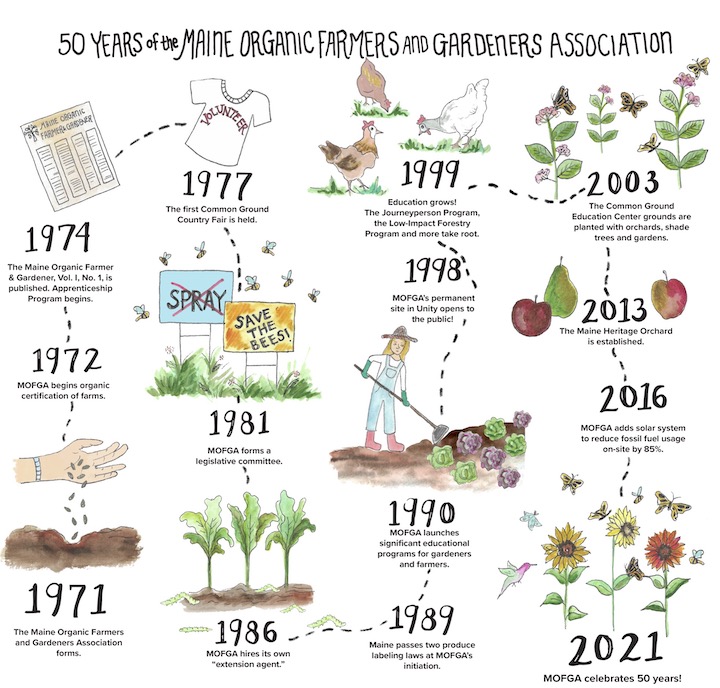 A Brief History of MOFGA

The Maine Organic Farmers and Gardeners Association (MOFGA) started as a group that brought people together to learn from one another — a model we have continued to follow since.

1971 – Organic growers started organizing for a statewide organization called the Maine Organic Foods Association (MOFA) in 1970. Charlie Gould, a Cooperative Extension agent, invited the many people who had been calling him with questions about organic gardening and farming to gather on August 12, 1971. Scott and Helen Nearing, authors of the 1970 back-to-the-land classic “Living the Good Life,” were guest speakers, and, from that meeting, the Maine Organic Farmers and Gardeners Association (MOFGA) was established.

1974 – The first issue of The Maine Organic Farmer & Gardener, published in August, offered practical articles about farming and homesteading. Also in 1974, the first apprentice, Chellie Pingree (then Chellie Johnson), applied to work on a farm. The Apprenticeship Program was formalized in 1975.

1977 – The first Common Ground Country Fair, conceived as a harvest celebration, drew 10,000 people to Litchfield. In 1978, the number of fairgoers doubled. A year later, a vision for a permanent Common Ground fairground started to take shape. In 1981, having outgrown the Litchfield fairground, the Fair moved to Windsor – where it continued to grow to more than 50,000 attendees.

1981 – While MOFGA had been engaged in legislative actions from its inception, 1981 marked the beginning of a formal legislative committee. Initiatives included a “no-spray register,” organic food labeling and a campaign focusing on hazards of pesticide drift. Over the years, MOFGA has continued to focus on promoting legislation that is critical to organic farmers and gardeners, while supporting a healthy environment for all. Learn more about MOFGA’s Public Policy Platform here.

1986 – MOFGA became the first organic farming organization to hire its own “extension agent,” earning the organization wide recognition as a serious farming and gardening organization. MOFGA continues to grow its technical services staff to this day.

1989 – At MOFGA’s initiation, Maine passed two laws requiring that produce be labeled regarding country of origin and post-harvest chemical treatment.

1990 – MOFGA held its first Farmer to Farmer Conference, an event for producers to exchange information. That same year, MOFGA also started its “Grow Your Own” program, encouraging and supporting home gardeners to produce more of their own food. In 2000, a one-night class, called “Grow Your Own Organic Garden,” was launched around the state.

1998 – MOFGA opened its permanent site to the public on opening day of the 1998 Common Ground Country Fair. In 1996, MOFGA had purchased more than 200 acres of field and forest in Unity and Thorndike. With a year of planning and 11 months of hands-on work (much from volunteers), MOFGA established: a road network and almost a mile of underground water and electric lines; a drilled well and pump house; a water tower and septic system; a walking trail through the woods to the parking lot; a meeting space, office building and exhibition hall; a shop/maintenance building; four livestock barns; a comfort station/bathroom; two ticket booths; and an amphitheater.

1999 – After arranging over 500 apprentices on members’ farms, MOFGA started its Journeyperson Program as a next step for people wanting to farm. MOFGA also hosted several community education initiatives that are still going strong today, including the Spring Growth Conference, Small Farm Field Day, the Seed Swap & Scion Exchange and a Low-Impact Forestry workshop. A forest management plan was developed for MOFGA’s woodlands that year.

2003 – Two orchards, over 120 shade trees, a perennial garden, various shrubs, and vegetables and nursery stock were planted at MOFGA’s Common Ground Education Center in Unity. Pines were selectively thinned in the woodlot, with much of the harvested wood slated for use in MOFGA projects.

2013 – An old gravel pit on MOFGA’s property began its transformation into the terraced Maine Heritage Orchard (MHO). The first trees were planted on Earth Day in 2014. Today the orchard is home to over 300 varieties of apples and pears traditionally grown in Maine, with more being added each year.

2016 – In 2016, MOFGA entered into an agreement with ReVision Energy to install a 102-kilowatt solar array on the grounds and to convert heating systems to use solar to reduce the organization’s fossil fuel usage by 85%. MOFGA completed installation of the solar array in 2017 and also installed 24 air source heat pumps in three major buildings. The water at MOFGA’s Common Ground Education Center has been solar-heated since 2009.

2021 – MOFGA turns 50 on August 12, 2021. Heading into its 50th year, in 2020, MOFGA certified over 500 producers, including 20 clean cannabis producers, with 69,000 acres in certified-organic production. Total organic product sales reached $90 million. The Journeyperson Program had 31 participants, 68 farms received technical assistance, and 21 farms were supported by the Maine Farm Resilience Program (which was initiated in 2018). Additionally, 2,950 individuals participated in 90 workshops, tours and events for gardeners and farmers, and 32,000 people flocked to MOFGA’s online offerings for the virtual Common Ground Country Fair. The Low-Impact Forestry Program began its third decade of managing the 125-acre woodlot at the Common Ground Education Center, completed a 10-year update of MOFGA’s forest management plan, and continued to engage forest owners through various workshops. In November and December, MOFGA piloted a pop-up brick and mortar store, the Maine Organic Country Store, in Freeport, expanding the reach of certified producers and other makers in the community.

MOFGA has worked with the Maine Folklife Center at the University of Maine to conduct oral history interviews with people who have played key roles in the history of the organization. Those interviews are archived at the Folklife Center.