Recent rains provided very welcome relief for most growers around the region. Long-term forecasting (two-three weeks out) is showing probabilities of temperatures that are above the normal range for June, with a slight probability for precipitation to be below normal. As of June 1, most of Maine was considered “abnormally dry” by U.S. Drought Monitor — but the three-month precipitation outlook is more promising than last year. In other words, here comes summer heat, keep an eye on the forecast and be prepared to water as needed.
With the warm and sunny start to the season, seedling transplant shock has come up a few times. Remember that “hardening off” seedlings isn’t just to prepare them for colder temperatures in the early spring, but also to prepare them for the drying effects of wind and long days of bright, hot sunshine. Transplants often have a lot of top growth relative to the size of their rootballs, which means more leaf surface through which to lose water. It also means more leaves needing water for photosynthesis and the evapotranspirational cooling that allows photosynthesis to occur efficiently and without damaging the plant itself (photorespiration and/or photo-oxidative stress, if you want to get into the biology of it). Leggy or overgrown transplants exacerbate this problem, and small rootballs can dry out quickly, but all transplants benefit from increasing periods of exposure to bright sun and increased air movement that they will be experiencing once planted out.
You can give your seedlings an easier transition by planting out just before cloudy or rainy periods, or at least later in the afternoon (to maximize the amount of time before the full heat and sun of the next day). Row cover, exclusion netting or shade cloth can shield transplants from both drying wind and full sun, until the plants have had a chance to grow new roots into the soil surrounding their new home — but care should be taken to check on temperatures under covers as well as moisture status, lest out of sight turns to out of mind. Surround kaolin clay can also be used as a spray to reduce the amount of light entering transplant leaves. 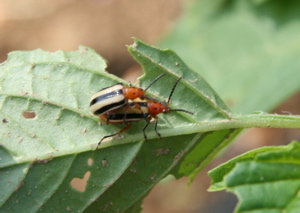 Overwintered leek moths had an early first flight this year — about a month ago. That means the first generation of the year is expected to emerge from their cocoons soon. The eggs they lay will hatch out to the second generation caterpillars which typically cause more damage. The pest is still confined to only a few areas in the state (as far as we know … ) but it may be a good idea to make sure they haven’t spread to you, as now would be the critical time to prevent damage from the second generation. Read more about leek moth here. 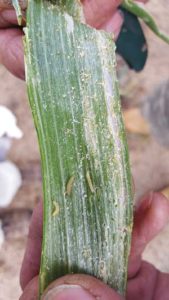 Striped cucumber beetle is our most serious early-season pest in cucurbit crops. These beetles spend the winter in plant debris in field edges and with the onset of warm days and emergence of cucurbit crops they move rapidly into the field. Densities can be very high, especially in non-rotated fields or those close to last year’s cucurbit crops. Adult feeding on cotyledons and young leaves can cause stand reduction, delayed plant growth and reduced yield. Critically, the striped cucumber beetle also vectors Erwinia tracheiphila, the causal agent of bacterial wilt, and this can be much more damaging than direct feeding injury. Crop rotation, transplants and floating row cover are cultural controls that help reduce the impact of cucumber beetles. Many growers use row covers or exclusion netting on cucurbits for both growth benefit and insect protection, removing them when flowering begins to allow for pollination. Parthenocarpic varieties do not require pollination and can allow for delayed removal of row covers or netting.

Avoid early season infection with wilt. Cucurbit plants at the cotyledon and first one-to- two leaf stage are more susceptible to infection with bacterial wilt than older plants, and disease transmission is lower after about the four-leaf stage. Using row covers to keep the beetles out at this most vulnerable stage can be very effective.

Beetle numbers should be kept low, especially before the five-leaf stage. Scout frequently (at least twice per week before emergence, and for two weeks after crop emergence) and treat after beetles colonize the field. The threshold depends on the crop. To prevent bacterial wilt in highly susceptible crops such as cucumber, muskmelons, summer squash and zucchini, we recommend that beetles should not be allowed to exceed one beetle for every two plants. Less wilt-susceptible crops (butternut squash, most pumpkins) will tolerate one or two beetles per plant without yield losses. Spray within 24 hours after the threshold is reached.

Insecticides that are allowed in organic production (listed by OMRI, the Organic Materials Review Institute) include kaolin clay (Surround WP), pyrethrin (PyGanic Crop Spray 5.0 EC), and a mixture of pyrethrin and azadirachtin (Azera). Surround should be applied before beetles arrive because it acts as a repellent and protectant, not a contact poison. With direct-seeded crops, apply as soon as seedlings emerge if beetles are active. Transplants can be sprayed before setting out in the field.

Perimeter trap cropping with a preferred cucurbit crop (usually a Curbita maxima such as Blue Hubbard or Buttercup) can give excellent control with a dramatic reduction in pesticide use. For details on using perimeter trap cropping, see University of Connecticut Integrated Pest Management Program’s “Directions For Using a Perimeter Trap Crop Strategy to Protect Cucurbit Crops.”