June’s dry start to the growing season has made for a generally low disease pressure around the region. Most of us have not experienced conditions which allow for the prolonged leaf wetness that many diseases require to take hold.
Two similar tomato diseases may begin to show up if you experience repeated or prolonged rain events. Early blight (Alternaria) is described below, though, Septoria leaf spot is very similar and the information effectively describes both diseases. Septoria was recently found on field tomatoes in Massachusetts.
In contrast to these two tomato diseases, powdery mildews are notorious for not needing prolonged leaf wetness to infect plants and often thrive in humid conditions like the region just experienced. Some reports of cucurbit powdery mildew have popped up throughout the region, prompting its inclusion in this edition of the Pest Report, though this disease is typically most damaging in the second half of the summer as nights get longer. It’s worth noting that powdery mildews are typically restricted to one or two species that they commonly infect. The powdery mildew that affects cucurbits is different than the one that infects apples, or lilacs, or bee balm for example.
Some farmers have reported flights of hornworm moths, likely beginning to lay eggs in tomato and possibly pepper crops. Folks may start seeing the caterpillars in the coming weeks.
I’m starting to get photos sent to me of potato leafhopper damage (“Hopperburn”) on bean plants. Just a reminder that these leafhoppers can be serious pests of beans, potatoes, hemp, hops, strawberries, forage legumes, apples and probably many more crop species and that the damage can look similar to potassium deficiency or a foliar disease. So if you are seeing die-back or browning on leaf edges, start looking for leafhoppers first.
Squash vine borer moths, mentioned in the previous Pest Report, are still being caught in fairly high numbers in New Hampshire and Massachusetts locations.
With the hot dry weather I have also been seeing lots of thrips damage in various crops.
The Pest Report doesn’t typically address tree fruit issues, but fire blight has become an issue for many apple growers in Maine this year, and I wanted to alert home growers to the need to check their trees. For information on damage control, read this article; for information on prevention next spring, see C.J. Walke’s article (note that the product Blossom Protect mentioned in the article has since been approved for use in organic growing).

Early blight is a serious problem in tomatoes and potatoes, but rarely affects peppers and eggplants. In most years, it is very common — much more common than late blight, which is usually rare in Maine.
All aboveground portions of the plant can be affected throughout the growing season. The disease starts on the lower leaves with small, circular spots with concentric rings that resemble a target. Leaves develop yellow blighted areas, eventually turn all yellow and die. The tomato fruit may rot on the stem end. Though rare, potato tubers can also become infected.
The pathogen overwinters on diseased plant residues in the soil. Initial infection is from splashing up from this overwintering site. However, by mid-summer, most of the infection is coming from spores blowing in the wind from the widespread infection in gardens and on farms across the region. 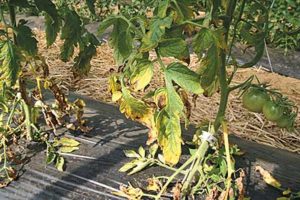 It is important to avoid early onset of the disease because the longer you can avoid the problem the more likely it is that you will harvest red tomatoes before the plants die.
Here are some cultural practices that can help you avoid this disease in your crops:

Hornworms are probably the most destructive insect attacking tomatoes, and they are showing up now. They are giant caterpillars that can do a vast amount of eating in a very short amount of time. Right now you may find young, tiny ones. Sometimes it seems that healthy-looking tomato or pepper plants are stripped of their leaves overnight, leaving bare stems. The hornworms will also attack fruit, eating gouges out so large that they look more like bites of a furry animal than an insect. 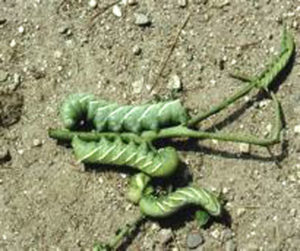 Look now for feeding damage and frass (insect poop) around tomato and pepper plants. The frass may be your first sign there is a problem. The frass of young hornworms is small, but the hornworms quickly grow large and so does the frass. I don’t bother looking for the caterpillar because they blend in so well – I just look for the frass. 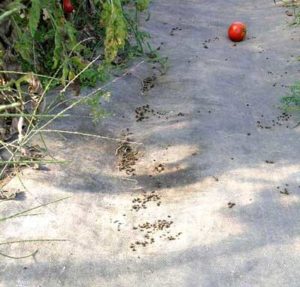 The adults are large, fast-flying hawk moths, that in flight may look like a hummingbird. At dusk they hover over flowers sucking nectar. Eggs are laid on tomato leaves and hatch in five days. They are most often found dead or dying among or nearby a tomato crop, after having laid their eggs.
Hand-picking is a bit frightening but does work, and chickens enjoy fighting with the challenging pest. The problem with hand-picking is that they blend in very well and it is easy to overlook one or two caterpillars, which can do significant damage in a day or two. Many growers report that using a black light at night helps to find them, as the caterpillars fluoresce brightly.
Bt works very well to control this caterpillar.
What are those white things on hornworms?
Hornworm larvae are parasitized by a number of insects. One of the most common is a small braconid wasp, Cotesia congregatus. Larvae that hatch from wasp eggs laid on the hornworm feed on the inside of the hornworm until the wasp is ready to pupate. The cocoons appear as many small white projections protruding from the hornworm’s body. Parasitized hornworms should be left in the field to conserve the beneficial parasitoids. The wasps will kill the hornworms when they emerge from the cocoons and will seek out other hornworms to parasitize. 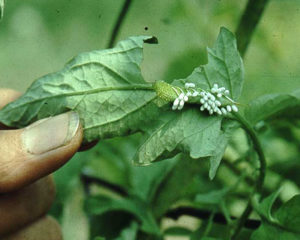 Powdery mildew is a common disease of pumpkins and winter squash. All cucurbits are susceptible, but many common cucumber and melon varieties are resistant. The disease can cause infected leaves to die prematurely, reducing yields and lowering fruit quality, especially taste. Winter squash from diseased plants won’t store as long as fruits from healthy plants. The fungus that causes the disease does not overwinter in Maine — spores blow up every year from southern overwintering sites. If they arrive late in the season, you may not need any control; but if they arrive in early to midsummer, exercise some control or you may have no leaves by mid-August, or bland, starchy squash.

I have not seen any yet, but it’s good to scout regularly. Check upper and lower surfaces of leaves of older plants every few days starting now. The first symptoms usually are white, powdery fungal patches on the undersides of older leaves. Yellow spots may form opposite these, on the upper leaf surfaces.

﻿No products with systemic activity (products that move through the plant) are approved for organic production, and applying fungicide to the lower leaf surface is difficult. In experiments, foliar applications of sulfur (such as Microthiol disperss) have been more effective than most other organic products for powdery mildew — apparently because sulfur deposited on the upper leaf surface can volatilize and be redistributed to the lower surface. Sulfur can be phytotoxic on melons, however, especially if applied when temperatures are hot.

There are some products made from potassium bicarbonate (Kaligreen and Milstop are two of these) that are showing good efficacy. For a good discussion of these, including efficacy, see the new edition of the Resource Guide to Organic Insect and Disease Management. Potassium bicarbonate combined with a horticultural oil (such as JMS Stylet Oil) has been shown to be more effective than either product alone. Several bio-fungicide products are available as well.