Garlic planting season is coming! Mid- to late-October is the time to plant individual cloves of garlic in the ground in Central Maine, so September is the time to make sure you have cloves to plant. After they’re planted, the cloves send out roots before the ground freezes, then, in spring, send up green shoots and produce multiple cloves within a bulb below ground. 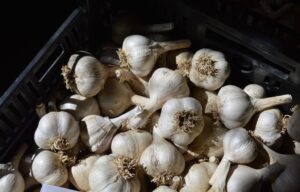 If you’ve never planted garlic before, the Maine Organic Farmers and Gardeners Association (MOFGA) urges you to try some this year. You can buy bulbs from Maine’s seed companies, such as Fedco and Johnny’s, either through their catalogs or at their booths at MOFGA’s Common Ground Country Fair, or you can buy bulbs from several  vendors at the Fair’s Farmers’ Market or Agricultural Booths. Take the bulbs home, separate them into individual cloves, and plant the cloves about 5 inches deep and 4 inches apart in a fertile soil. Around Thanksgiving, put about 4 inches of mulch (straw, leaves or other organic material) on the planting.

In the spring, remove the mulch. As the garlic grows, keep the soil moist and fertile (by applying an inch or so of compost to the ground, for instance).

If you’ve planted a stiff-neck garlic, such as the Rocambole type, each plant will send up a flower stalk that curls around and produces small garlic bulbils at the end. The common advice is to remove these stalks (also known as “scapes”) once they begin to curl around, in order to direct the energy of the plant toward growing larger bulbs, rather than toward producing bulbils at the top of the plant. You might want to keep scapes on a few plants, however. The bulbils can be harvested from these and sown in pots in late fall to produce on your windowsill what MOFGA-certified organic grower Tom Roberts calls “garlic grass” during the winter — greens that you can clip, like chives, a couple of times and use to season soups and other dishes. Bulbils can also be planted, like garlic cloves, in the soil outdoors in October. By early the next year, they’ll have produced what Roberts calls “garlic scallions.”  In two years, they’ll produce garlic bulbs. (Individual cloves, on the other hand, take only one year to produce large bulbs.)

Any scapes that you do cut can be chopped and used in stir-fries or to make garlic flavored vinegar. For the latter, just soak the scapes in white vinegar for a month or two, then remove the scapes and enjoy the vinegar on salads.

When the bottom two or three leaves of garlic plants lose their green color (in late July or early August, usually), it’s time to harvest the bulbs. Pull or dig the bulbs carefully and dry them for about a week in a shaded place. Then cut back the tops, rub off any soil clinging to the bulbs, and store the bulbs until you’re ready to eat them.

Some garlic comes with a history. The Phillips variety, for example, is a Rocambole type that Molly Thorkildsen and Will Bonsall of the Scatterseed Project in Industry, Maine, acquired from Raymond Rowe of Phillips, Maine, who acquired it from a man living in Rome, N.Y., whose ancestors brought it from Italy in the early 1820s, when they came to work on the Erie Canal. Thanks to the efforts of the Maine Seed Saving Exchange, the Scatterseed Project, and Maine’s garlic growers and seed companies, the variety is increasing in popularity.  It’s known for its large heads of six to eight cloves that are easy to peel and store longer than most other varieties — sometimes for a year or more.