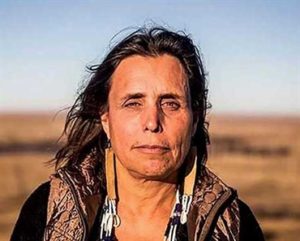 Winona LaDuke is a rural development economist and author working on issues of Indigenous economics, food, and energy policy. She lives and works on the White Earth reservation in northern Minnesota and is the executive director of Honor the Earth. LaDuke’s current project, Anishinaabe Agriculture, is working to relocalize a food economy and to restore traditional food varieties – including Indigenous varieties of corn, beans, squash and potatoes – that can adapt in a time of climate change. The following article has been excerpted from LaDuke’s keynote address at the 2020 Common Ground Country Fair. Visit MOFGA’s YouTube channel for the entire speech, along with a Q&A session with LaDuke, moderated by MOFGA’s executive director Sarah Alexander and board president Beth Schiller.

Maybe our ancestors will look to this time as the time of the seventh fire, a time when we have a choice between two paths: one well-worn and scorched. Or maybe they would refer to this and the future as the time of the bat. In Anishinaabe history and teachings, we’ve been told that a lot of times it’s a small creature that can change the world. In this moment, it is said that the COVID-19 pandemic came from a bat. In the larger picture, the United Nations talks about the loss of biodiversity as a cause of things like this pandemic. The more that you encroach on the wild, the more dangerous things will come to your territory and to your people. That’s a teaching of the Anishinaabe people. That’s the teaching of all of us. Don’t mess with Mother Nature.

I like what Arundhati Roy, the Indian writer, talks about. She talks about the idea of a pandemic as a portal. She says that, “Historically, pandemics have forced humans to break with the past and imagine the world anew. This one is no different. It is a portal, a gateway between one world and the next. We can choose to walk through it, dragging the carcasses of our prejudice and our hatred, our avarice, our data banks and dead ideas, our dead rivers and smoky skies behind us. Or we can walk through it lightly, with little luggage, to imagine another world. And ready to fight for it.” We intend to walk into that next world with our communities.

“Gete okosomin” is a really cool, old squash. Inside it is about 1,600 seeds. To me, planting is a lot about promise, and the squash is a lot about promise. Indigenous seeds and Indigenous foods are central to our survival and our future generations – and I’m going to tell you why. America was once very great. There was tremendous biodiversity, from the 50 million buffalo to the agrobiodiversity of 8,000 varieties of corn. That’s when America was great.

The loss of biodiversity is associated with colonization and is associated with globalization. But remember the great times when we were self-sufficient people and could feed ourselves. They say you can’t say you’re sovereign if you can’t feed yourself. I think that’s a little of the challenge that we face now. But, in this moment, what we find is that Indigenous people, seeds and biodiversity still remain central to the potential to protect our world and to protect future generations – that is through adaptation.

On a worldwide scale, major corporations like Monsanto and Syngenta are talking about climate change adaptation varieties that they’re developing. They’re introducing those, sucking up billions of dollars, to create climate-smart varieties. $136 million is the average cost for climate-smart seeds per species.

So what you want in the time of COVID, in a time of crisis, is to figure out how we’re going to survive. This is really a small snapshot of what the future, climate change-challenged world will be. It is our opportunity to be smarter, not to try to go back to normal, but to be smarter.

So how are we going to do that? We’re going to learn what localization is about, how to be here on our land. In the big picture, it turns out, size matters. What I mean by that, in this particular case, is that big agricultural systems fail us in a time of COVID. The average American meal travels 1,400 miles from farmer to table – that’s not working. We’ve just taken a pretty big hit because of that. During the beginning of the COVID pandemic, by mid-March, farmers were dumping thousands of gallons of fresh milk into lagoons and manure pits. Idaho farmers dug ditches to bury millions of pounds of potatoes. A single chicken processor was smashing 750,000 unhatched eggs every week.

Let me talk about the potato. Today, in northern Minnesota, we are battling the single biggest independent potato grower in the country: R.D. Offutt. They grow one or two varieties of potatoes. Climate change scientists are looking at how to adapt potatoes now; where they go, of course, is to Indigenous people. The Potato Park in Cusco, Peru, is an epicenter of potato diversity today. The Peruvian museums host over 5,000 varieties of potatoes. The park itself has about 1,300 varieties growing in the Sacred Valley of the Incas.

Potatoes are being looked at today to save our future generations. Sowing potatoes at different altitudes and in different combinations creates new genetic expressions that will be very important to respond to the challenges of climate change. Indigenous potatoes from those ancestors will come into the future. That is what we must do; we must rebuild our food systems. We can’t travel 1,400 miles from farmer to table. And when we rebuild our food systems, we will build them with a lot of our traditional varieties.

A lot of people know I’m a corn grower. I’ve been growing corn for about 30 years. This year I’m growing a Mandan variety and I’m growing Oneida White flint corn, and I’m growing Seneca Pink Lady. When I first grew my corn, it was really short. And I thought, “Oh, I have failed.” But it turns out that a lot of these varieties don’t need to grow tall. They need to put on an ear and, if they could put on an ear, then they put on the food that you need. So a lot of our old school varieties from my region – the Ojibwe people pushed corn the furthest north in the world, about a hundred miles north of Winnipeg – are not tall. They’re short and they’re frost-resistant and they’re drought-resistant. When the big winds came through, they blew down Monsanto’s varieties but ours stood. So plant for climate change and plant local, and grow your food for your own community.

We have to do some decolonizing. Do you remember how it is that we grow and how it is that we eat? When you know how to grow our hominy food and you know how to process that, you could really rock the B vitamins and improve your nutrition. Our communities, like this whole country, took the Pillsbury Doughboy too seriously – and we all started looking like him. It’s time to move on.

Adapting for the Future

We need to adapt our technology. I was on Pine Ridge reservation last year. They were trying to grow their tomato varieties and big hailstorms knocked them down, a couple of years in succession. On White Earth reservation, we first grew some of our varieties in wigwams and then there were high tunnels; now we’re building underground greenhouses because I want to be able to feed my children and the future generations. It’s good to keep it a little warmer and a little safer.

What we’re looking at is post-petroleum agriculture. Pretty much we’re slathering petroleum on everything in our food system for the 1,400 miles it travels from farmer to table. All the fossil fuels additions. All those things called “cide” they put on food. My feeling is that the suffix “-cide” has much to do with homicide and suicide and genocide. Society shouldn’t put it on your food.

Hemp is what I call the new green revolution. For the past 5 years I’ve been growing hemp in the state of Minnesota, but I’m interested in fiber hemp because it is the new green revolution. They say 70 years ago we had a choice between a carbohydrate economy and a hydrocarbon economy – carbohydrate or hydrocarbon – and we made the wrong choice. The carbohydrate economy was hemp. Anything that you can do with fossil fuels you can do with hemp, plus more. Just think about the fact that the word “canvas” comes from cannabis.

It turns out that lot of our tribes have both feral varieties of hemp leftover from the eradication program. Somehow they didn’t get to us. So there is some hemp in our territories, some Cannabis sativa in our territories; that still grows. There is an initiative underway now for tribes of large land areas to begin looking at hemp as a part of transforming the materials economy. If you could take all the things you make out of plastic and make them out of hemp, that’d be revolutionary. And that’s what I want to see.

Up in northern Minnesota, we’re growing hemp. It is going to be part of the revolution. If you want to transform the world, this is our opportunity. Systems are crashing. Idols are falling. Fossil fuels are failing. Now will be the time to walk through that portal and to make that new economy. From my little neck of the woods, up on the White Earth reservation, to all of you elsewhere, let’s get local, let’s get renewable energy, let’s get local foods. Let’s grow some hemp. And let’s use our Indigenous knowledge of transition. Remember, we’re a people that are post-apocalyptic. We have lived through our own apocalypse and, as the world around us is shaking, we can be coherent because we know how to get through this: stick with our traditions and pray hard. Get yourself a green thumb – now is the time.