Nettie Fox Farm is located in Newburgh, a small town about 30 minutes outside of Bangor. The farm is 33 acres, 12 acres of open fields and the rest in woods. We are about a half hour from the coast and an hour and a half drive from Acadia National Park. 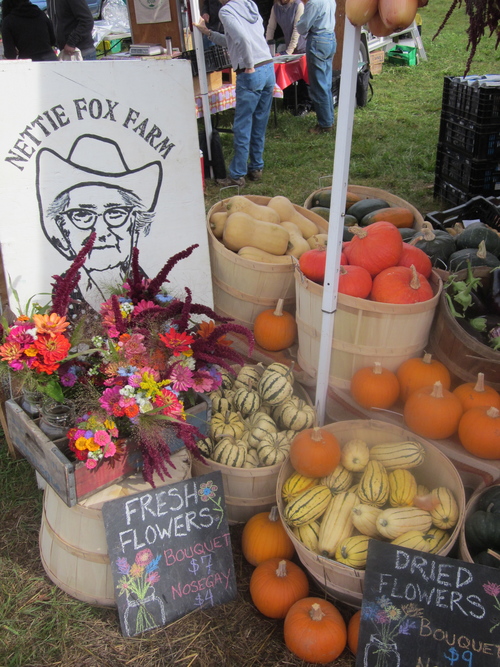 What is the ideal time period for your apprenticeships?

Nettie Fox Farm is located in Newburgh, a small town about 30 minutes outside of Bangor. The farm is 33 acres, 12 acres of open fields and the rest in woods. We are about a half hour from the coast and an hour and a half drive from Acadia National Park.

We cultivate 3.5 acres of mixed vegetables directly marketed to customers with a 90 member Summer CSA, weekly farmers’ market, online pre-order and Fall/Winter CSA. The farm operation includes small-scale pastured poultry (turkeys, meat chickens and eggs), processed on the farm. We currently cultivate by hand and with  tractors, but always look for new ways to reduce tillage, if possible. This season, we are building a new wash pack building and greenhouse. We have plans to install a solar array on the new building to power our farm and home. We are also working with NRCS this season to construct an extensive underground pipeline irrigation system. Apprentices would have a unique opportunity to learn about these various infrastructure projects.

Is your operation certified organic? If not, to what degree are organic methods used on your farm?

We are looking for people interested in exploring a full-time career in farming. Successful applicants will have good interpersonal skills, attention to detail, a sense of humor and a strong commitment to healthy food and sustainable agriculture. Previous gardening experience preferred, but not required. Must have experience with outdoor manual labor in inclement weather, a valid driver’s license and the ability to safely lift 50 pounds repeatedly (many bushels of vegetables!). Overall, we are looking for people who appreciate the value of a good day of hard work in the great outdoors.

What do you expect of an apprentice?

Work crews consist of combinations of farmers, apprentices, trained volunteers and occasionally hourly workers. Work hours are generally 7am-4pm, Monday through Friday, with weekends off. We may occasionally ask apprentices to perform small tasks on the weekend, if we are away from the farm (watering seedlings on a hot day, opening and shutting greenhouses during a storm). We can usually accommodate reasonable requests for time off with enough notice. As we are now farming with two young children (2 and 4), sometimes chaos reigns. We ask apprentices to be patient, empathetic and self-sufficient during these times.

Explain how you provide instruction, training and feedback to apprentices

We work alongside apprentices most of the day, offering guidance, demonstration and discussion. We were both introduced to farming through apprenticeships and value this education model. Apprentices will be given opportunities for solo projects and have access to the farm library.  We are 20 minutes from MOFGA headquarters and allow time off to attend their excellent summer farm training sessions that happen all over the state. We will have frequent check-ins with apprentices, but do our best to talk through issues as they come up. We try to harbor an environment of open communication on the farm and are always looking for ways to improve the apprenticeship experience.

Are you a full-time farmer?

Yes. Molly works part-time for Fedco Seeds in the winter.

Please describe your level of daily or weekly involvement of apprentices.

We think it is very important to work alongside our crew as much as possible.

Apprentices are paid $1200 a month, plus housing and food from the farm (veggies, limited eggs). There is a two week probationary period.

Do you provide housing?

Please describe the accommodations, facilities and explain any room and board arrangements

We have two small children and we try to include them in as much of the farm day as possible. Both sets of grandparents are often around to help with childcare and harvest tasks. We all take turns cooking crew lunches during the week. Breakfast and dinner are typically on your own, but we do enjoy occasional crew paellas and campfire cookouts. Enjoying the delicious food grown on the farm and by our friends is one of our top priorities, and we love to share our passion for food with the crew. We do our best to accommodate dietary restrictions.

Apprentices are housed on-site in a 12 x 16 timber frame cabin, built by Everett with wood milled from our farm. The site is a short walk to our farmhouse. It has limited solar electricity, but no running water. A yard hydrant is available 100 ft away. Cabin has a propane cook stove and basic kitchen supplies. Refrigerated items may be stored in a designated spot in the farm walk-in cooler. A solar shower is available. We lived in the cabin for over a year, and are happy to help troubleshoot rustic living solutions. Unfortunately, we cannot accommodate pets. No tobacco or illegal drugs, but responsible drinking ok.

Do you require a prospective apprentice to visit your farm before a final arrangement is made?

An interview is required and farm visit preferred, but not required. We have a two-week trial period in order to assure that apprentice and farm are good fits for each other.

We do not have a written employee manual, but do our best to make our expectations clear with open communication and by working alongside apprentices to address questions and evaluate work as it is happening. We plan to have check-ins as needed but definitely after the two-week trial period and each month after.

Molly grew up on the Kennebec Road, just a few miles from Nettie Fox Farm. She graduated from Vassar College in 2003 with a degree in Environmental Studies and Geology and moved back to Maine in 2005 to start growing vegetables as an apprentice at Peacemeal Farm in Dixmont where she fell hard for farming. After spending time working on farms in Washington state and as the MOFGA Farmer in Residence with Christa Bahner of Bahner Farm, she purchased Nettie Fox Farm in 2009 using the Farm Service Agency’s Beginning Farmer loan program.

Everett was born and raised in Albuquerque, New Mexico. After high school, he spent a year abroad in China and then graduated in 2009 from Willamette University, after a year abroad in Munich, Germany.

In 2009 Everett took a blind leap into the Maine agrarian lifestyle. After apprenticing at King Hill Farm in Penobscot and a handful of other nearby farms, he operated his own small wholesale veggie farm on work-leased land. In 2014 he and Molly joined forces at Nettie Fox Farm.

Please describe any ideological and/ or political views that may affect an apprentices experience on your farm. How would navigate if apprentices views are different from your own?

We are both very politically liberal/progressive, but respect those with views and backgrounds different from our own. Those whose beliefs might be construed as discriminatory are encouraged to seek employment elsewhere. We eat meat most meals and process meat birds for our own consumption on-farm. Apprentices are under no obligation to participate in livestock processing and we are respectful of those who wish to leave the farm during this time.

All references available on request from the farmer.

Apply to be an Apprentice
Previous
Next